RBGG is very pleased to welcome two new associates this Fall – Jennifer L. Stark and Sarah Poppy Alexander.  With the addition of Jen and Poppy, the firm now has 13 associates.

“Jen and Poppy both have stellar educational and clerkship credentials, as well as prior successes in litigation,” says Managing Partner Mike Bien.  “We continue to attract highly talented associates to the firm who provide exceptional service to our clients.   We are committed to giving all our lawyers both the training and experience they need to develop as lawyers.”

“I was interested in coming to RBGG because of the unique way that the firm combines public interest and commercial litigation,” says Jen.  Poppy adds, “Everyone I spoke to both inside and outside the firm commented about the great atmosphere – both in terms of the training that associates receive and the opportunities presented to take on significant responsibility early in your career.”

According to Mike, “The firm’s active trial and appellate practice creates great opportunities for our associates to take on responsibility and it’s very gratifying to the partners to see our talented young lawyers rise to the occasion time and time again.” 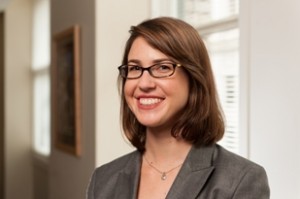 Jennifer Stark received her J.D. from Columbia Law School in 2009 where she was a Dean’s Public Interest Scholar and an Articles Editor of the Columbia Human Rights Law Review.  At the same time, she was earning her M.S.W. degree from Columbia University School of Social Work.  Jen worked as an Equal Justice Works Fellow for the ACLU of Southern California from 2009 to 2011 before clerking first for the Honorable Dorothy W. Nelson of the Ninth Circuit and then for the Honorable Lucy H. Koh of the U.S. District Court for the Northern District of California.

While at the ACLU, Jen was part of the legal team that brought the groundbreaking case, Franco-Gonzales v. Holder, a federal class action on behalf of immigration detainees with mental disabilities who were incarcerated in Arizona, California and Washington.  The lawsuit established the right to legal representation for immigrant detainees with serious mental disabilities who are facing deportation and are unable to adequately represent themselves.

Sarah Poppy Alexander received her J.D. from Harvard Law School in 2012 where she received the Dean’s Award for Community Leadership, after earning an M.A. in Political Science from UC Berkeley in 2007 and a B.A. with distinction in Political Science from Yale University in 2004.   She clerked for the Honorable Martha Craig Daughtrey of the Sixth Circuit in Nashville, Tennessee in 2012-2013 before joining RBGG.

Poppy has a background in political theory and legal scholarship.  At Harvard, she became involved with the Human Rights Clinic where she worked on three amici briefs to the U.S. Supreme Court on behalf of legal historians in Kiobel v. Royal Dutch Petroleum, arguing that corporations can be held liable for violations of the law of nations under the Alien Tort Statute.  Poppy says that her work with the Clinic helped shift her career focus from legal theory to practice.  She has remained connected with her Harvard colleagues and was part of the team that filed an amici brief in November 2013 in one of the first major ATS cases to reach a court of appeals since the Supreme Court ruled on Kiobel, involving torture of detainee’s at Iraq’s Abu Ghraib prison in 2003 and 2004.