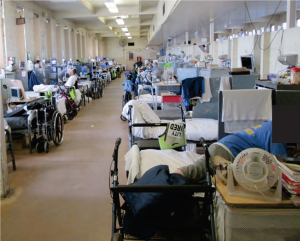 Links to the emergency motion and supporting documents filed with the court, along with CDCR’s filings in response, are provided below.

Experts in both public health and public safety are urging that California take immediate action to prevent a COVID-19 disaster in the state prison system.  On March 25, 2020, attorneys from Rosen Bien Galvan & Grunfeld and Prison Law Office filed an emergency motion before a three-judge court in Sacramento and San Francisco requesting a modification of the 2011 California state prison population cap to prevent an uncontrolled outbreak in the state’s 34 adult prisons.

On March 31 the California Department of Corrections and Rehabilitation (“CDCR”) filed their response.  The court held a telephonic hearing on April 2.

On Saturday evening, April 4, the three judge court issued a ruling denying the motion on the grounds that the three-judge court lacked the power to issue a population order until the single judge Coleman or Plata  courts attempted to address the pandemic by ordering measures other than a prisoner release.

‘He could die’: California urged to release older prisoners amid coronavirus, The Guardian, April 6, 2020

The motion is backed by the testimony of Dr. Marc Stern, an expert in prison health care, as well as by the state’s former parole chief, Thomas Hoffman, both of whom testified that the public safety and health are at risk if the pandemic is allowed to spread through an overcrowded prison system.

April 4 Order of the Three-Judge Court:

Request for Judicial Notice of Emergency Measures In Other Jurisdictions

Examples of Other Emergency Measures